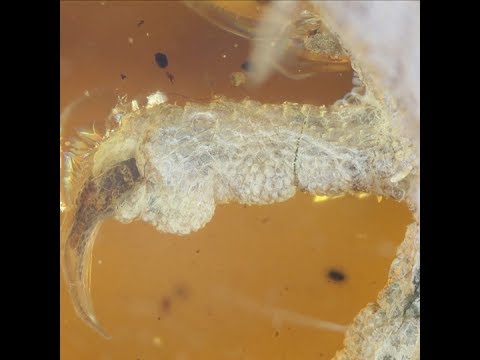 100 million years ago, a baby bird slowly awoke, shaking the dew from his head and opened its eyes.

It was the Cretaceous period, and what could it have seen, from high upon a Conifer tree? A herd of Iguanodon passing by? Maybe it heard the sound of a hungry Triceratops munching on plants at the base of the tree? What’s that?! A Tyrannosaurus rex chasing two annoying kids playing with flashlights?!

Who knows, because moments after this little guy started his day, it fell into a pool of sap oozing from the same tree he dared called home. And there he stayed, throughout many great extinction periods of both animal and man. The continents split, re-joined, and split again.

Oceans rose and fell, and three Jurassic Park sequels passed us by. All the while, there it was, frozen in time, with a look on its face that simply says: “What the hell is this sticky stuff?”

This article is based on Bird caught in amber 100 million years ago is best ever found by Michael Le Page and published by New Scientist 7th June 2017.