The one and only time I’ve ever created a ‘3D’ version of a littlebloke – was way back when I was a spritely (or hobbit-ish) 14 year old, in 1994 for a school art project.  I gave my mum the finished piece as a gift – and it still sits on display in my old bedroom [Awwwwwwwww].

(Thanks for the pics mum! I’m even more impressed you managed to use your iPad to take the picture, attach to an email and send them to me! You are getting tech-savvy in your old age)

For those wondering why they aren’t wearing England shirts, well – we failed to qualify that year.  Before I created the piece, I had to convince the teacher that a ‘cartoon-like football sculpture’ was ‘art’; oh how things have changed – the concept sketch below is the second real-appearance of a ‘littlebloke’ 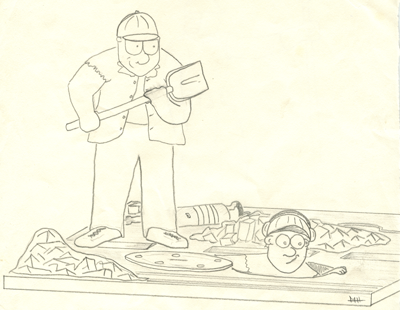 Founder & Creative Director of NJ based lbStudios - Marc has spent over 20 years in the IT industry working on global digital media projects, is an avid reader, writer, illustrator and collector of Ladybird Books. :: "Imagination Rules the World".

The great don hertzfeldt just re-released his classic animated short film REJECTED in 4K, on Youtube. He asked the question: what was your first...